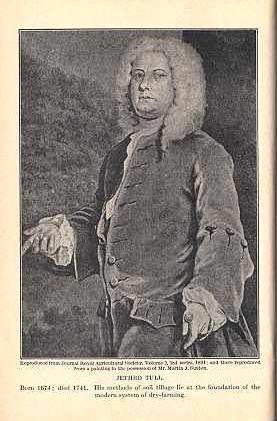 Jethro Tull (1674-1741), English agriculturist, known for his
innovations in farming techniques and equipment, Born in Basildon,
Berkshire, and educated at the University of Oxford, Tull was
admitted to the bar in 1699 but never practiced law. He became a
farmer, and in 1701 he invented a machine drill that sowed seeds in rows,
permitting cultivation between the rown and reducing the need
for fallowing. The rotary mechanism in the invention was the
foundation of all subsequent sowing implements. Tull placed great
emphasis on the importance of pulverizing soil so that air and
moisture could reach the roots of growing plants; he produced a
horse hoe to be used in this process. His ideas about farming were
incorporated in a book, The New Horse Houghing Husbandry (1731),
which was greatly expanded in 1733.